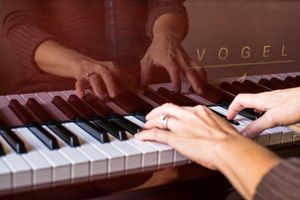 It’s funny how you can hear that something is off as a pianist and not know exactly what is wrong with it or how to fix it until a teacher explains it. When I sit at the keyboard I often don’t ask the same kinds of questions of myself that I would if I were a teacher. It doesn’t come as naturally to me, perhaps because the work on notes and rhythms and memory and the physicality of what’s going on is consuming enough that to think beyond that is not automatic. However, as a teacher, you are physically removed from the keyboard and are freed up to think about the piece objectively; also, your mind is not engaged in trying to affect the quality of sound or remember what is next. You can focus completely on the notes that you’re hearing, the quality of the sound, and the interpretation of the music. In a recent lesson with Pawel Checinski, we worked on honing my interpretation of J.S. Bach’s Toccata in C Minor, BWV 911.

His comments to me at the beginning were that the first and second measures felt disjointed: it sounded like I started one piece and then in the second measure I was in a different piece with a completely different tempo. Pawel suggested that to fix that I could extend the length of the first note on the second measure (which is a sixteenth note). He said I wasn’t holding it long enough, instead starting a completely different tempo. If I lengthened the note, I could ease into the new tempo. (The new tempo was not inappropriate, but it was too sudden a change after beginning a piece in one tempo.) So I lengthened the note and gradually built up to the tempo that I wanted. I felt like this was a good solution and allowed me to keep the spirit of what I was trying to do while making a smoother transition so that the music didn’t feel disjointed.

I think as a performer there is so much of the body that is involved in the execution of bringing the music to life that it can be easy to get lost in the physicality of it and play almost robotically. It’s as much a matter of learning to listen to one’s playing and know what to listen for, as it is a way of thinking. It’s a very complicated task. Think about it: you are trying to physically play the notes that are on a page, remember exactly what was written on the page, listen to yourself as you’re playing, make decisions on the spot about what you are doing (for instance, if you need to change the dynamic or adjust something), and to also plan what is coming next without thinking so far ahead that you lose what you’re playing in the moment. It’s like you have to think past, present, and future at the same time. But it is dangerous to reflect too much on the past, like if you make a mistake, because you have to keep playing. Performance art is such a different medium from the visual arts. Once you’ve painted a stroke you can step back, sort of pause time, and reflect on whether that was what you actually meant to do or not. You can cover it up or change it. But in performance art, you are not free to fix mistakes. You have to move past them and make your adjustments after the fact, or choose to ignore what just happened completely and move on like nothing happened.

There is a point to all this. We started working on nuance, which is so important for music to have in order to create an effect. Pawel was saying that Rachmaninoff used to play these fifths in a way that you could hear the harmonics but you didn’t realize exactly what was happening. It created a feeling, kind of an atmospheric effect in the music that listeners could feel but couldn’t describe. These kinds of nuances, bringing out individual voices, lengthening a note that lasts less than a second in time, adjusting one’s attack of a single finger in order to create a more fluid line- all these things are micro adjustments that a pianist makes in order to create a certain type of sound. And it’s not just required for one’s technique, although that comes into it, but it is something that has to be evaluated for each note in each measure in each page of each piece of music by each composer that one studies.

It is an intensely detailed process. To focus on the weight of one’s finger on one of a number of 16th notes in one measure is incredibly picky, and yet adjusting the attack of that one note can make the whole line sound different. It is a fascinating, incredibly focused, time-consuming process, which makes me wonder sometimes if it’s worth the time and effort. No, not if it’s worth the time and effort - of course it is! The question really is how much time do I devote to it at, or away, from the piano?

As Pawel said, his goal was to give me tools that I could apply in many different areas of the piece as well as in my understanding and study of music in general. His suggestion to make a drawing of the architecture of the Bach, his pointing out the statement of the theme in each individual voice and reminding me to make them all consistent in articulation, his emphasis on arm weight over a pressing into the key - all these tools are valuable because I can bring them to further study when I am away from my teacher.

So is there a conclusion to the matter? Not really! I know what steps I need to take to further my studying this music, and for that I am grateful. But part of me feels like I don’t have a brain space to bring this kind of focused study to my daily practice while trying to raise three girls. Even with them at school all day it is not realistic for me to think I can spend those six hours at the piano. There are other life things that need to be taken care of while they are gone. But what I can do is make the most of the time that I have I do have and work smartly, for lack of a better word. And bit by bit I can make progress. The truth of the matter is that no musician ever stops growing; there is always the capacity for becoming a better musician. No one really ever arrives. And yet, there is satisfaction in the process of continually growing, in being challenged and trying new things.