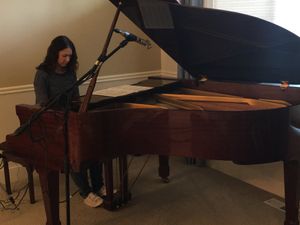 I recently released my debut classical piano CD, Commonplace Beauty, which was recorded in my living room! It all started about 13 years ago with the seed of an idea from a friend of mine who suggested doing a trilogy.

At the time we recorded a Christmas CD (O Come, O Come Emmanuel), and the plan was to follow it up with a worship CD and a classical CD. I had participated on recordings before, but had never done a full-length solo album, so I was excited to be a part of this project. We recorded O Come, O Come Emmanuel in two days up at Icicle Creek Music Lodge in Leavenworth, Washington, and my friend and his business partner did the mixing and mastering as well as a good portion of the replication and distribution. Fast forward to 2017, a marriage and three children later, and I started thinking about tackling another solo recording.

I was set on recording in my living room for a few reasons. One, I absolutely adore my piano, a Vogel by Schimmel grand that has the most shimmery top and a wonderful full bass. Two, I had this idea that I could record “at will” whenever I had a piece ready. (I have since revised this idea, after learning about how much is involved in the process.) Three, my children are all in school full-time, so I technically had “a lot of free time” (Any mother, working or stay-at-home, will realize the folly of this statement!). Four, I did not want to pay for studio time and be limited to a day, or three, of intense recording on an unfamiliar instrument.

I began by playing around with my Zoom H4n voice recorder in different positions. It screws easily into a camera tripod and has several different recording settings. It gets a pretty good stereo sound and records to an SD card, which is easily popped into my computer. It even has a remote so you can position the Zoom several feet away and start and stop/pause recordings as you like. (By the way, I found the best position for it ultimately was in the crook of the piano, facing the back hinges, and just parallel with the top of the case. The lid was on full stick.) I listened to the files with Audacity, which is a free downloadable software program that allows you to cut and paste, add reverb and reduce noise, and much more. It is really a fun tool. I wanted a little more roundness to the sound, though, and so I began asking friends about recommendations for microphones.

I borrowed a wonderful condenser microphone for a few months and tried plugging it into the Zoom (It has two inputs for microphone cables), but found it to be extremely sensitive, too much so for my use. I consulted with another friend who has a $1000+ set-up of microphones that actually clip inside the piano, which was intriguing to me, but that set up wasn’t exactly the sound I was looking for either (A little too close-mic’d and “studio”-sounding). I really wanted more of a live sound, where you would feel like you were sitting in my living room while I played (although I didn’t want it to sound like I just pressed “record” on my tape recorder!!). I then borrowed a Rode NT4 stereo microphone (pictured in the photo above when I was experimenting with positioning) from a friend and found that, combined with the Zoom, I had almost exactly the sound I was looking for. After several months I realized that the DIY approach was not going to take me all the way (YouTube videos and Google articles and experimenting were only taking me so far) and I put out a plea to friends for someone who had experience recording and mixing classical music. God led me to an old colleague I had played with years before who now is a piano technician, piano tuner, fabulous jazz pianist, and has 20 years of recording experience in his own studio!

Tom came over to my house, consulted with me for almost two hours, and helped me find some sweet spots in my living room for placing the microphones. After he left, I spent a few weeks experimenting with placement and then started sending him files. Of course, then my piano decided to develop some never-before-heard clicks and squeaks, and so recording was delayed until we could find the culprits and solve the problem. Tom prepped my piano so that it would withstand multiple recording takes and I set aside two weeks to record. Every spare second, as soon as I got my kids off to school, the dog into the kennel on the porch, the fish tank filter turned off…and then waited for the landscapers to finish mowing, the neighbors to drive away to work, the airplanes to finish flying overhead, the wind to stop blowing and the rain to stop pounding…I would spend recording, making notes on “takes,” listening, and recording again. It was wonderful and stressful and intense and exhausting, but so rewarding when a take would come out satisfactorily. With my perfectionist tendencies, I wanted technically flawless takes so we wouldn’t have to do a bunch of cutting and pasting, and I *mostly* succeeded. With the exception of two pieces (I won’t reveal which two!), every song I recorded was done live, without edits. Tom did add some reverb and magic in his studio during the mixing process and I am pleased with the results. Of course, that wasn’t the end of it all. After the mixing is done, and the sound is the way you want it, you have to get the tracks mastered so that the volume is consistent from song to song and the timing between pieces is right. I sent the mixed files off to DiscMakers and after several long emails, a spreadsheet and a comprehensive phone call with the mastering engineer, we got to the place where I felt the album was “done.”

For time’s sake, this is the condensed version of the process, and does not take into account the meetings with my graphic designer, the hours of planning and practicing, recording and listening and sending files to friends (months before the “official” recording ever took place), the endless hours of researching recording techniques and gear, creating my Facebook “musician” page, updating my website, blogging and updating social media with news about the recording process, figuring out how to set up an online store, figuring out how to license two of the selections on the CD that are not in public domain, and applying to CD Baby for online distribution.

So now I’m “done,” right? Well…The CDs have been shipped to my house, are in the process of being sold, and now there is more work to be done in marketing and distribution. But the CD is finished! I completed this grand experiment of recording in my living room with bare bones equipment, no producer except myself, and a little help from my friends. It has been an incredibly satisfying year-long journey, and once I learn some new repertoire I think I’ll try it again!